Before taking on the task of producing a music video for rock band, Whiskey Lies. We knew the video would rely heavily on the performance of it’s two lead actors. But, how to audition our actors when the script for the music video contained no dialogue?

In order to scale this obstacle, our head writer crafted a scripted scene, featuring the lead characters—specifically for the purpose of casting.

However, it occurred to us that we could use this bespoke ‘sample scene’ for a multitude of experiments as well as simply casting. So, we rented a small set in a local townhouse and used the space as a means to test out our ideas for set dressing, costume design, and lighting plans.

Scenes like this can be life-changing for an actor with little existing material for their showreel. If you need a bespoke scene for your showreel, please get in touch and we’ll be happy to; write, direct, and produce one starring you!

To find out more about how we constructed the scene and how it helped us in making the music video, you can find a more detailed blog post from 2018, here.

And the final music video here.

You Know Who | Screen Test 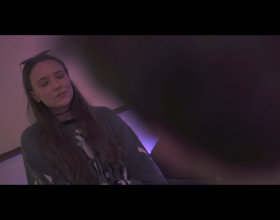